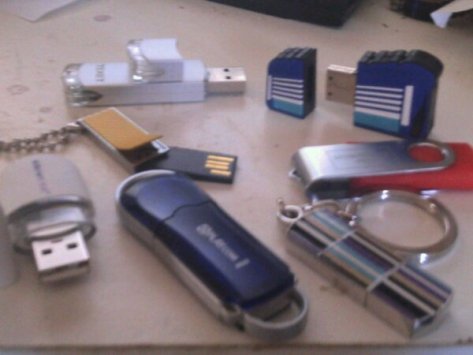 I seem to have a problem with memory sticks. I have too many of them. This photo is just of what I found on my desk just now, there are more lurking somewhere (and not all of the lurkers even work, and one ancient thumb-drive requires drivers installing which kind of defeats the object).

I don’t need them all, the novelty USB drive in the shape of a well-known brand of razor is just plain stupid (The boss at work had been given it by a rep, he thought it was just some kind of eraser, but then he is not very good with computer technology). The one I got free with a trial of The Economist acts strangely if I store more than 500MB on it. The silver Texet thumb drive only hold 256MB so is pretty useless, same with the white thing front left.

The others all hold either 4 or 8GB of data so they’re ok.  BUT WHY DON’T I JUST HAVE A CLEAR OUT? I could format these drives and then recycle them, or give them away. Or maybe sell the novelty one on Ebay.

I’m sure this is a bloke thing, this obsession with gadgets, and the hoarding of gadgety things. Such as having quite a few key-ring torches.* Another example: Somewhere under my bed a have a box of about a dozen USB leads, just in case…