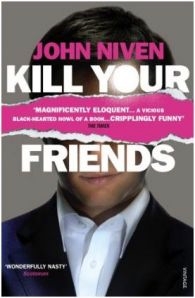 It is offensive on just about every level you care to mention – the main character is racist, sexist, fat-ist drug hoover. It is also one of the funniest things I have read in a long time.

When the plot turns murderous, it is less convincing, but the rest of it, telling the story of an A&R man at a London record company in the late 90s is hilarious. There is a lot of filthy sex and swearing, and a colossal amount of drug-taking.

I will not be lending this to my mother.