This was the plan… 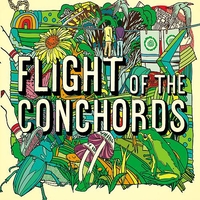 Flight Of The Conchords: Rather Good

Already a) has failed – I saw the Flight Of The Conchords album for £3, and simply had to download it. It’s very good, as I suspected (I already had ‘Ladies of the World‘, and played it to death), even if it doesn’t have ‘Frodo, don’t wear The Ring‘ it’s still pretty damn good.

If there was ever a c) – there wasn’t, but maybe should have been – it has failed. I suppose c) would have been ‘don’t acquire any more music if you can possibly help it’. Paste Magazine are feeling the crunch a little at the moment and have solicited donations to keep the good ship Paste afloat until this financial storm has passed. The incentive here was 75 rare MP3 FREE to whomever donated. I barely realised I’d done it, before I knew what was what I was confirming a small donation from my Paypal account… come on – it was 75 FREE MP3s!!