It wasn’t quite what I had planned for may bank holiday to be honest (a lie-in, followed by bugger all, since you ask) but today I got taken by my friends to a Victorian Town theme park sort of thing. Ok, museum, then. 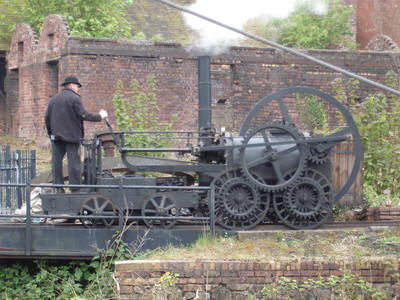 It’s quite something that most of the buildings here have been transported brick by brick from 50 miles away, as have some of the  engines which must weight many tons. All of the staff were in period dress, and seemed to be equiped with period manners too.

The more-or-less first thing everyone did was queue for either chips or sweets, but then it was time to eat anyway. I had thought it was going to be a picnic – the weather put paid to that – so had a vast quantity of egg butties to eat.  Some of the buildings were original to the site – there is a huge blast furnace (remains of – the museum in in the ironbridge area, cradle of the Industrial Revolution etc) that to me looks quite like a moorish castle. 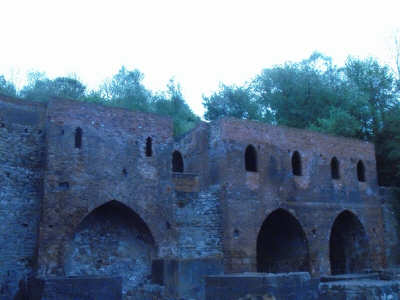 Come on, it does look a little like a Moorish castle...

It was £13 to get into this museum, or a ‘passport’ for all of the local Industrial Revolution museums was £20. So we all went for the £20 option, which forces us all in the next year to get out of the house and go and look at a tile museum or walk down a long tunnel with bitumen* seeping through the sides. Which can only be educational.

*The booklet decribed bitumen as being ‘like treacle’, which I think is a dangerous thing to say as someone sooner or later is going to try eating it.